Strengthening Resilience through Crowdfunding in Somalia

A Learning Review article from 2019 about the concept of crowdfunding which has been introduced in Somalia in recent years with many Somalis showing interest in contributing to community owned activities.
Published: 2019
Author: Fardosa Hussein, Communication Manager, Somalia; Dr Arero Halkano, HoD Food Security and Livelihood, Somalia

The standard humanitarian funding approach is primarily donor driven: a top down approach with little engagement with beneficiaries and local Government actors. The beneficiary contributions to programming in particular need examining as they are not well integrated into the standard project design approach. A different approach to funding and project design is crowdfunding. This aims to integrate local resources such as beneficiary communities, local authorities, private investors and diaspora populations through an online fundraising platform. Not only can this generate extra resources for humanitarian and development funding, it can also enhance accountability, transparency and effective programming. Through a collaborative process, government and local actors can also be involved in the procurement/finance process.

The concept of crowdfunding has been introduced in Somalia in recent years with many Somalis showing interest in contributing to community owned activities. For too long, decisions on what gets to be funded has been taken by everyone except the communities most affected by those decisions. In Hudur, in the south west of Somalia, Action against Hunger in collaboration with Shaqadoon, a local NGO, started an online campaign to raise funds for communities living in Hudur through their online platform called Bulshokaab. This platform is for development initiatives across the Somali region. Bulshokaab is an initiative of the Somali Resilience Program (SomReP), a consortium of seven international agencies (Oxfam, ADRA, Action Against Hunger, Danish Refugee Council, CARE International, COOPI and World Vision International) aimed at building resilience across Somalia.

USING THE APPROACH IN SOMALIA

Action Against Hunger in collaboration with Shaqadoon established a crowdfunding platform for projects with a social impact. Funding with the administration and with the contribution of individual citizens, non-profit organisations and private companies.
Shaqadoon were responsible for sensitising communities to get a better understanding of how crowdfunding works to promote community ownership over social initiatives. They have transformed the community mindset to contribute towards a common goal through crowdfunding by mobilising and training community representatives who have then presented successful crowd funding projects in Gedo region.

The community was mobilised to form a 13 member committee (consisting of intellectuals, religious groups, elders, youth groups and the local authority) to be in charge of every project who then opened accounts in both Dahabshil and Salaam bank. The project was posted on their online platform and people from across Somalia and the diaspora started contributing money towards the three shallows wells and one borehole for the community in Hudur distirict.

Currently, Sheikh Aweis borehole crowdfunding is at $10,330 and $3117 for the three shallow wells in Shidle, Kheyr Cabdille and Waney village in Hudur. With the amount raised for each shallow well, Action Against Hunger will top up with $28,427.50. The rehabilitated water catchments and shallow wells by the SWS-DRP project are currently supporting the communities amid the looming drought and water crisis in Hudur, while complimenting WASH projects targeting IDPs with water trucking.

Based on the experience of the Action Against Hunger team in Somalia, there are four steps to ensuring that a crowdfunding initiative is successful:
Setting up the platform and sensitising, mobilising and training community members on how to propose projects.

Communities (endorsed by their local authorities) and initiatives (endorsed by an organisation) submitting projects to an online crowdfunding platform like Bulshokaab.

An expert panel reviewing and deciding whether the project proposal that has been submitted meets the criteria to qualify for funding through the online platform.

Selected projects receiving a start-up workshop. Communities should have access to one on one-on-one support on how they can create awareness about their project with the support from their endorsed organisation.

Through the formation of committees for the crowdfunding project, a sense of community ownership was developed as members of the community organised and made decisions at each stage of the project. This also allowed for transparency and accountability as committee members regularly updated the community on the amount of funds raised on the platform.

Community members have also had an opportunity to give their feedback through a Beneficiary Feedback System that allows for the organisation to give first-hand response on any matters arising from the crowdfunding project as well as other projects. Feedback such as complaints, suggestions, inquires and appreciations are shared through either SMS or through the Interactive Voice Response (IVR) system. The IVR has been a unique initiative, since it allowed beneficiaries to share their feedback directly by sending a recorded message through an easy to remember short-code (310), which is then captured into a platform where Shaqodoon maps the nature of the feedback into categories. This type of technology friendly feedback mechanism has really boosted the confidence level in communities.

On the other-hand, some of the challenges we have encountered is the limited financial systems that hinder the diaspora community from contributing to the platform. We are currently using Shaqodoon’s Crowdfund platform, who are a local organisation that is not internationally registered therefore limiting contributions from Somali diaspora who have credit card facilities. However, they do have Taaj service, a money transfer company. Taaj is limited to the diaspora community who have credit card facilities and are not familiar with remittance companies such as Dahabshiil. The current platform is connected to all local financial institutions who provided the FINTECH mobile money services in Somalia making it simple for those with access to mobile banking to contribute through the platform.

Lastly, community projects are not a familiar concept in most rural areas in Somalia. Some of the challenges that arise from crowdfunding for this project include reluctance from the communities to contribute to projects, with many citing that there should be projects other than construction and rehabilitation of water points in the community.

Action Against Hunger will assess the impact of this approach during Action Against Hunger SomRep EU southwest drought recovery end line evaluation. The findings of the endline evaluation will be disseminated through social media (Twitter, Facebook), high level events organised by the government/private investors and sector work groups meeting (food security clusters, resilience working groups forums) to create awareness on the approach’s viability and promote confidence in the contributors to support future funding for such initiatives. 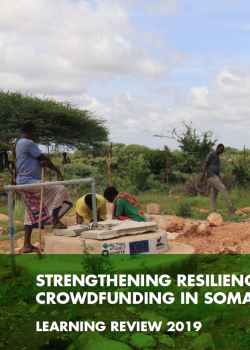