A learning article from the Learning Review in 2019 detailing a special psychosocial support sub-activity that involved establishing a small team of psychologists to link into the community.
Published: 2019
Author: Andy Solomon-Osborne, HoD/Technical Advisor MHPSS, Ethiopia

Experience of working in mental health shows us that often those most in need are least likely to access services. Reaching out into the community and talking about psychosocial issues, promoting anti-stigma messages, building knowledge among family, community leaders and teachers allows greater chances to identify and engage with those in need of psychological assistance – especially among the most hidden and vulnerable in the community.

Reports on the mental health of South Sudanese refugees in camps in the region (UNHCR, 2016) showed high levels of moderate to severe poor mental health including Post-Traumatic Stress Disorder, major depression, acute anxiety, psychosomaticsymptoms2, adjustment disorder, negative behaviour, suicidal ideation and neglect of both family and self. Most affected are vulnerable groups including mothers and young children, which impacts basic infant and child care practices.

Following the formation of South Sudan and the subsequent civil war, hundreds of thousands of South Sudanese fled the region into neighbouring countries, including Ethiopia. In response to a renewed round of fighting and violence which led to a new influx of refugees, a new camp was established to host 82,000 individuals. As part of Action Against Hunger’s response, five nutrition centres were constructed, each containing a Baby Friendly Space (BFS). A BFS is a holistic, safe space providing Infant and Young Child Feeding, Care Practices and Psychosocial Support to pregnant and lactating women and infants as part of an integrated Community Management of Acute Malnutrition (CMAM) programme.

The BFS teams reported high levels of poor mental health and psychosocial problems among their pregnant and lactating beneficiaries, and noted that many were not engaging with services regularly. Stigmatisation of poor mental health also seemed to be contributing to isolation and a lack of engagement. As there was no mental health provision in the camp, a special psychosocial support sub-activity named the ‘Psychological Distress Programme’ (PDP) was developed as a pilot under the BFS range of activities in the next round of funding, that involved establishing a small team of psychologists to link into the community. The service was designed as a mobile (peripatetic) activity, with the team being able to move around the camp. The team were able to provide activities in different locations such as ‘under the tree’ in the camp community, in schools, health sites, other NGO buildings as well as in Action Against Hunger sites including the Baby Friendly Space.

The primary objective of the service was to reach out and engage with those in need of psychological support that were being missed or were hidden – particularly mothers and caregivers who were part of the nutrition programme. This also included family members. The service also wanted to contribute to improving the acceptance of mental health and understand more about how mental health is seen within the Nuer refugee population.

The programme was implemented by three teams, comprising of three qualified psychologists and three local speaking psychosocial workers, working in pairs. The teams were clinically supported by one Senior Psychologist and a Mental health and psychosocial support (MHPSS) Technical Advisor at mission level. These teams would provide group and individual therapeutic sessions, organise awareness campaigns in the community, train teachers and community leaders on psychological first aid and mental health awareness, make and support referrals with protection and health agencies, and advocate with NGOs and UN agencies at cluster and coordination level.

The pilot was able to evidence a high prevalence of poor mental health among beneficiaries. Psychologists reported from one-to-one sessions of high levels of multiple issues including: depression (67%), acute anxiety & fear (44%), psychosomatic symptoms (41%), self-harming & suicide ideation (19%), drugs/alcohol (self or partner) (15%), and psychotic symptoms (14%). Other key findings showed that 45% of children referred (between 5-10 years old) were for symptoms related to epilepsy. 86% of the referrals for children (16 years old and under) were for developmental, intellectual and/or physical impairment issues. The results showed a number of hidden issues. One worth noting is that 8% of adolescent and adult females coming to counselling sessions sought help for problems relating to gender based violence including rape. This led to the establishment of a close collaboration with GBV and Child Protection providers for referrals and case management.

These findings clearly indicate the huge need for mental health support within the refugee population, and have provided evidence for the humanitarian community, supporting further initiatives in this sector. For example, a specialist mental health NGO used these findings to secure long-term funding for their mental health programme in the same camp targeting adults through the health sector.

This pilot helped us understand how we can reach and better assist those who are most vulnerable. We found that mothers and caregivers were quick to engage with the range of services offered, illustrating that with sensitive programming (that included building a lexicon of words that describe mental health issues in their language) and with strong linkages via nutrition services, trust could quickly be established. In beneficiary feedback interviews, 98% said they found services helpful and 85% said they would recommend this to others mothers and caregivers they knew.

A particularly important learning concerning complementarity of nutrition and mental health services, is the effectiveness of the BFS as a linkage between nutrition, IYCF, child care practices and psychosocial support. As most mothers used the BFS, they had already experienced a more psychologically orientated service that incorporated their emotional well-being and this contributed to establishing of trust and improved acceptance of working with psychologists. This also worked effectively for GBV and protection beneficiaries who preferred to discuss issues initially with the psychologists who then linked them to protection agencies. It is therefore vital for future programming to create links between the various services, taking a more holistic approach that considers all aspects of health and well-being.

The main challenge lies in longer-term financing. For most donors, Mental Health and Psychological Support activities usually sit outside of nutrition interventions and are more typically considered part of a health or protection interventions. Securing funding for these type of programmes can therefore be more difficult, although positioning this as an integrated programme with nutrition was successful.

Another challenge is to ensure that there is a suitable referral pathway for more severe cases. Support from a regional hospital with a psychiatric unit is helpful, and collaboration with universities in the region with mental health departments can be beneficial for mental health advocacy. Both regional hospitals and local universities can play a vital role in providing clinical resources such as staff and students. 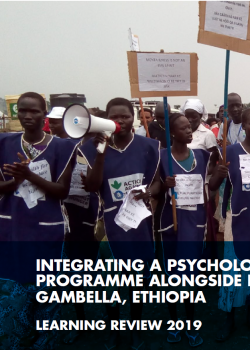