Home » Learning » Early Warning and Preparedness in the Sahel

Early Warning and Preparedness in the Sahel

In 2010, Action Against Hunger began to regularly track droughts in West Africa using satellite imagery. While we were by no means the first to do so (such imagery has been used to track drought in Africa since the 1980s), our maps and reports gained a reputation for their reliability and regularity and they became part of our wider Early Warning System in the Sahel. The core idea behind these maps is Early Warning/Early Action; if we can predict droughts early enough, this allows sufficient time to prepare a response. This is methodologically easier in the Sahel than many parts of the world. With a single rainy season from July-September and a peak lean season (for herders) in April-May, we have a solid 7 months to prepare from the end of the rains (when we can assess drought conditions) to the onset of a seasonal crisis.

During the 2017 rainy season it became imminently clear that the Sahel was facing a drought many times more severe than that which we had seen in recent years. Vegetation growth had diminished in grazing areas. Livestock would die or have to engage in abnormally long seasonal migrations. All signs showed the lean season would be catastrophic, and early. As such, the interventions necessary to keep herders from losing their livestock were textbook: distribution of animal feed, provision of veterinary services and cash transfers. Indeed, with many months to prepare, avoiding the worst of the crisis seemed a reasonable expectation.

Unfortunately, this expectation would not materialise. By the end of August 2017, Action Against Hunger’s Early Warning System had published a warning on the incoming drought, ringing alarm bells. By October, we had published definitive results of our satellite image analysis showing a clear drought and by November a public call to action was issued in partnership with a number of humanitarian and producer organisations (WFP, OCHA, Save the Children, SNV Netherlands Development Organisation, VSF-B and Reseau Billatal Maroobé).

As predicted by the early warnings, drought conditions began to set in by December 2017, forcing livestock herders to begin a very long and arduous migration. By January, Sahelian pastoralists were in a lean season. Severe acute malnutrition rates were well above the emergency threshold across Mauritania, Mali and Chad. By this point, we were in crisis phase, and still no discernible response had been planned.

It wasn’t until March 2018 that funding began to become available. Statements issued by UN agencies and other NGOs calling for “early action” were seen by May. But by this point it was already too late. Projects financing took months to materialise. A number of responses were realised as the 2018 rainy season began, signalling the end of the drought. Livestock feed, which was so desperately needed a few months prior, was distributed when it was practically worthless as new pasture would soon cover the Sahel. Some drought response projects did not even begin implementation until well into the rainy season. As this chart shows, some disbursements were not made until well after the end of the lean season.

WHERE DID WE GO WRONG?

Action Against Hunger was not an exception to the rule in this case. While we were the first humanitarian actor to issue warnings for this drought, we were not very fast in planning responses based on those warnings.

In many cases our understanding of preparedness ends at fundraising. Action Against Hunger’s country-level response plans were typically crafted around proposals, which were put together when donors expressed a glimmer of interest. But when preparedness activities lacked financing, contingency planning was conspicuously absent.

Likewise, our early warning data, which is built as a public good, can easily be utilised for fundraising. The drought’s early warning datasets are published within days of the final imagery being available. However there exists an impulse common across the humanitarian sector to see early warning data as an investment to be recouped. The notion being that we worked hard for this data, thus we should only publish it once we present it first to a donor and ensure that others do not use it to fundraise. If we are serious about disaster preparedness, we will have to think about contingency planning as going beyond proposal writing and early warning, and not merely as an input to fundraising. When an imminent drought can be seen months in advance, we should come to the table with pre-formed ideas without a nod from a donor.

WHAT DO WE DO DIFFERENTLY NEXT TIME?

Build seasonal response plans into our programming without waiting for the go-ahead from a donor. This will improve the quality and coherence of a response, while signalling a legitimate commitment to preparedness.

Integrate preparedness across the board in our operations so that it’s not siloed away and entirely dependent on specific grants. Project-by project reforms won’t help; we need to take a programme approach to preparedness.

Rethink our strategy for capacity building. Resilient local structures need to be able to undertake prevention and mitigation without us and we should be looking at capacity-building strategies integrated in our operations, rather than tied to a specific contract.

A rethinking of capacity-building as a resilience measure will require retooling our approach. Training workshops for local partners, while the dominant avenue of capacity building, offer diminishing returns in strengthening systems beyond the very short term. We need to improve one-on-one collaboration between our staff and their counterparts as well as consider staff placements within partner organisations.

HOW ARE WE TRYING TO FIX IT?

The 2017-2018 drought serves as a teachable moment for us and we’re working on integrating those lessons, building on what we learned from our 2017 evaluation of our Early Warning System. Currently in development are several projects to enhance our drought preparedness and improve the resilience of pastoral communities, including:

A model for livestock interventions as part of a larger Early Warning-Early Action programme to ensure that we can develop actionable preparedness and response plans at the country level once a drought is detected. A toolkit will be adapted from the Livestock Emergency Guidelines and Standards, allowing country offices to more easily plan for pastoral-focused responses. This model will streamline response and preparedness planning by directly linking it to the outputs of our early warning system.

There is a good opportunity to grow from this. Our early warning systems are built for preparedness. Rather than focus on early warning as fundraising, let’s use them as planning tools and actively work to promote the resilience of communities and partners. 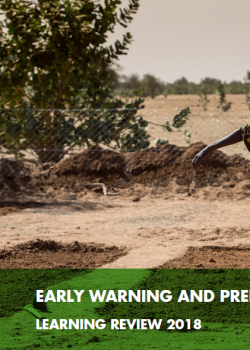