OVERVIEW OF THE SYSTEM

In Guatemala, Action Against Hunger has helped to establish a coordination and early warning system at the municipal level so that relevant stakeholders can coordinate on nutrition and food insecurity issues. At the municipal level this system is contributing to the preparation and management of timely and comprehensive information on food and nutrition insecurity. The use of this system supports disaster risk reduction and preparedness. Its main objective is to protect people and their livelihoods, which are exposed to climatic threats and other factors of social vulnerability (such as unemployment, price increases and migration), by helping to improve emergency management and empowerment of municipal representatives, decision-makers and policy holders, mainly at the municipal level.

The implementation phase of this system has involved the management of information on food security and nutrition as well as the strengthening of effective coordination processes between national and local authorities, organised civil societies, and the humanitarian actors in the area. Working on these processes is helping to improve a better governance among involved stakeholders at the same time as offering clear and pertinent mechanisms to face the problems as they arise and develop adequate solutions, actions and approaches.

The design process of this system has taken approximately three years by a consortium of different actors that have contributed to studies, validation processes and trailing of technical information management tools. These partners include:

HOW THE SYSTEM WORKS

Currently, this system of early warning for food and nutrition insecurity is based on the following steps:

First, Action Against Hunger defined a series of indicators and variables that have allowed community actors to monitor their food security and nutrition situation using a “traffic light” approach to keep track of the level of severity of food insecurity. The communities then contribute data to the municipal information system by providing their inputs on a monthly basis. The government actors (ministries of agriculture, health, education, labour and development, among others) then collate this data and discuss it during a monthly “situation room” meeting, where they identify key problems, possible emergencies, vulnerable communities, and cases of malnutrition. They then identify key roles and actions within the framework of governmental and municipal institutions.

Action Against Hunger, in coordination with the technical team at the Secretariat of Food and Nutrition Security, has also developed the decision-making methodology “Analytic Hierarchy Process” (AHP), which is based on mathematical weightings that involve a panel of experts grouping information to agree on priority indicators and variables in line with the three pillars of food and nutrition security: i) food availability, ii) food access and iii) consumption and biological use. For example: one variable is a “day without rain”. The panel decides what weighting it should be given for each pillar of food availability. After carrying out this prioritisation for all identified variables, an algorithm based on mathematical formulas is generated, allowing the different weightings to be brought together by variable and by pillar. The end result is a system that can provide an overview of food security and nutrition in an area and generate early warnings based on the status of changing variables. This information is used to generate information products that key stakeholders can access though a web platform and use to inform decision-making.

The main challenges for Action Against Hunger in Guatemala related to this methodology include:

Some of the main learning that has come out of the establishment of this early warning and coordination system has included:

Next steps for this project in the coming months will include: 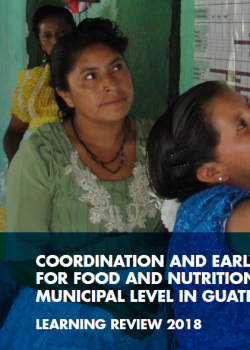