Central America is the world’s second most vulnerable region to adverse climate and geological hazards and is therefore constantly exposed to multiple threats. Tourism is a major driver of the economy and is highly sensitive and vulnerable to the expectations and confidence of visitors in the event of a disaster. Indeed, beyond the most direct humanitarian impact of disasters, their occurrence could damage the reputation of the tourist destinations, with negative effects on livelihoods and the local economy. In recent years, the region has faced Hurricane Otto, Hurricane Nate and the eruption of the Fuego Volcano, which all caused human losses and significant material damage. These disasters particularly affected tourist destinations with fragile knowledge of Disaster Risk Reduction (DRR) practices. The main tourism destinations are in areas with a low culture of disaster preparedness. Additionally, the tourism sector in the region has no history of inter-institutional coordination on DRR issues.

PUBLIC-PRIVATE PARTNERSHIP AND DRR APPLIED TO THE TOURISM SECTOR

Action Against Hunger in Central America and its’ partners developed a response plan to address this problem. Climate and geological disasters affect communities that completely depend on the tourism sector for their livelihoods. Loss of this source of revenue will undoubtedly drive swathes of the population into poverty. Action Against Hunger has been working under a Public Private Partnership model in Central America since 2015. We expanded this approach to the tourism sector by connecting the national Chambers of Tourism with civil protection bodies to generate coordination for the development of resilient tourism in four pilot areas.

The eruption of the Volcano Fuego in Guatemala led to a number of joint initiatives between the public and private sectors in recovery and reconstruction processes, which highlighted the importance of coordination in implementing resilient practices.

Since 2000, Action Against Hunger has worked to promote DRR by including innovative approaches from the private sector. The organisation’s accumulated experience has been key to the development of DRR in Guatemala and Nicaragua to strengthen the resilience of the most vulnerable tourism destinations. In the last two years, interventions have been implemented around four axes:

This project has been developed in alliance with the National Chambers of Tourism of Guatemala (CAMTUR) and Nicaragua (CANATUR), Universities (UNAN-UNI), Governing Bodies in charge of DRR, tourism entrepreneurs, Municipal Governments and regional governmental bodies (SITCA and CEPREDENAC). It represents an example of collaborative, holistic and multidimensional work that has managed to improve resilience in Central American destinations.

WORKING TOGETHER TOWARDS RESILIENCE

The initial alliance between the tourism and civil protection sectors revealed a lack of mutual knowledge between both areas of work in the countries, particularly when faced with a hypothetical emergency or disaster in tourism destinations. On one hand, there was no coordination mechanism for emergency and disaster response in these communities, and on the other hand, there were no contingency plans from private companies to withstand the impact of disasters, which would put business continuity, jobs and development at risk.

One of the challenges we faced was the preconceived notion that entrepreneurs and the general population were already resilient, and that building additional resilience would be too costly. The greatest challenges have been to achieve a change in the behavior of business people concerning responsibility and commitment to civil society, and for state entities to strengthen their work in collaboration with the private sector.

The project created spaces for coordination between the tourism and civil protection sectors and trained members of civil society on DRR and disaster risk management (DRM) issues. Local and national authorities also joined the trainings in the aim of contributing to safe and resilient tourist destinations in inter-institutional coordination.

We learned that the recognition and inclusion of all stakeholders is key to establishing strategic public – private alliances to save lives, prevent and reduce losses, ensure rapid recovery of the affected area, its population and livelihoods.

Following these initial trainings, the governing body of civil protection in Guatemala replicated some of the project’s activities, such as the minimum standards for the certification of “resilient hotels” and the creation of a “pilot” award to companies that are committed to Integrated Risk Management and Disaster Risk Reduction in Guatemala.

Public and private partnership and DRR interventions from the tourism sector are an example of regional integration that has favoured i) the protection of life; ii) the improvement of the quality and competitiveness of tourism enterprises; iii) the collective multi-stakeholder support; iv) the promotion of investment with resilient parameters and; v) the promotion of disaster risk reduction from public and private investment as a contribution to sustainable economic development.

Sharing good practices and experiences in dialogue spaces before regional bodies such as the Central American Tourism Integration Secretariat (SITCA) and Coordination Centre for Natural Disaster Prevention in Central America (CEPEDRENAC) has contributed to strengthening processes of adoption of DRR initiatives for the tourism sector with a view to future replication, consolidation and sustainability.

THE FUTURE OF TOURISM RESILIENCE

The coordination between these sectors has opened the door to a new stage of tourism in the region. For instance, the regional entity for Risk and Disaster Management in Central America and the Dominican Republic has included the issue of risks in its minimum quality standards of the sector, and scaled it up to the Central American Tourism Integration System. DRR standards presented by Action Against Hunger, the National Chambers of Tourism and Civil Protection, were adopted and recommended for implementation in tourism zones.

The Guatemalan Chamber of Tourism prioritised creating spaces for discussion around resilience. Even after the closing of the project, it continued to open new spaces for DRR discussion with government entities. It presented the topic at world forums alongside the Ministry of Tourism, such as the International Tourism Fair held in Madrid in January 2020. At the local level, tourism destinations have adopted tools for territorial and business planning that allow them to improve their disaster preparedness. The sector’s heightened vulnerability to disasters has contributed and increasingly coordinated a proactive approach to planning, training and preparing tourism destinations. We will continue exploring public-private partnerships in future projects to build on these lessons learned around maximising stakeholder engagement and project impact. 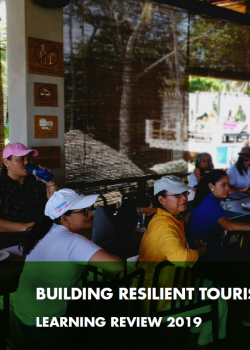