A 2019 Learning Review article about the Baby WASH approach applied in Nigeria in response to a LinkNCA that found inadequate access to safe WASH to be major risk factor for malnutrition in the area.
Published: 2019
Author: Kanaganathan Rangaiya, WASH Head of Department, Nigeria

Despite economic growth in recent decades, Nigeria continues to carry one of the most severe malnutrition burdens in the world. According to the Nigeria Demographic and Health Survey 2018, 37% of Nigerian children aged 6 to 59 months are stunted, 7% are wasted and 22% are underweight. UNICEF estimates that just 18% of Nigerian children aged 6 to 23 months receive the minimum acceptable diet, and 80% of malnourished children under 5 lack access to treatment.

Regionally, stunting is most prevalent in the country’s northern states, where non-state violence under the Boko Haram Insurgency has uprooted more than 2.5 million from their homes. Of all states, Kebbi, northwestern Nigeria, bears the highest proportion of stunted children (57%), while Anambra in the Southeast bears the lowest (18%). In Yobe, northeastern Nigeria, military interventions have depleted security barriers and exposed pockets of famine, allowing humanitarian organisations to access the displaced.

A growing body of evidence indicates that access to safe water, sanitation and hygiene (WASH) is a key determinant of growth in a child’s nutritional development, with a number of studies signalling the need for stronger integration of the WASH and nutrition sectors of programming.

In line with this evidence, a Link Nutrition Causal Analysis (LinkNCA) conducted by Action Against Hunger in 2017 found inadequate access to safe WASH to be major risk factor for malnutrition in Nangere Local Government Area (LGA), Yobe State. The study revealed that 99.1% of households in the survey area relied on untreated groundwater for drinking and washing, 85.6% lacked access to safe latrines, and 14.1% used soap and water for handwashing. Among the participants surveyed, ash was not known as an alternative to soap, and knowledge of water treatment practices was minimal. The findings called for a multi-sectoral response, underlining the potential that a more integrated approach to programming could have in remedying the high rates of stunting and global acute malnutrition (GAM) in the region, which, in 2017, stood at 68.8% and 14.7%, respectively.

In response, Action Against Hunger applied the Baby WASH approach – an integrated package targeting children in their first 1000 days of life (the critical window of opportunity for preventing malnutrition). The pilot aimed to address the LinkNCA’s findings by providing pregnant and lactating women (PLWs) with basic handwashing resources (soap and materials for constructing a ‘tippy tap’); complementary feeding items (lidded cups and bowls, child cutlery and play mats); and training on child WASH and nutrition. 5,562 PLWs were targeted across a period of 18 months, and interventions were administered as part of a wider multi-sectoral nutrition programme (INP+), which was implemented in partnership with UNICEF, the WFP and the local government.

A mixed methods study comprising 800 household surveys (HSs), 11 key informant interviews (KIIs) and 9 focus group discussions (FGDs) was undertaken to determine the relevance, effectiveness and sustainability of the response. For comparative purposes, data from the target group was mapped against that of a non-intervention community in Tarmua, who did not receive the package.

When compared with the non-intervention community, rates of handwashing were significantly higher (17.2%) in the intervention community, with 90.4% of PLWs in Nangere demonstrating consistent and adequate use of soap upon endline observation. While 90.9% of Baby WASH participants reported daily use of the complimentary feeding items and child play mats, acceptance of the ‘tippy tap’ remained low, with 96.05% of PLWs expressing a preference for traditional kettles.

Risk perception of child diarrhoea incidence remained low among PLWs in both communities, and, although Baby WASH participants demonstrated significantly better knowledge of 6 faecal to oral transmission routes, fewer than half were able to identify routes besides drinking dirty water or eating food contaminated by flies. Additionally, there was no significant difference (p<0.05) in the number of PLWs who identified child mouthing as a cause of diarrhoea between the communities, and FGDs in both revealed that many PLWs still believed that diarrhoea was a symptom of teething.

Despite these findings, the recalled prevalence of diarrhoea among children under 2 was significantly lower (p<0.05) in the intervention community (16.7%) than in the non-intervention community (23.0%), and a binary logistic model showed that children in households with improved sanitation were three times less at risk of diarrhoea than those in households with unimproved sanitation.

The Baby WASH package was implemented in Nangere LGA with the aim of improving household sanitation and reducing the prevalence of stunting and malnutrition among children within their first 1000 days of life. While an overall improvement in household sanitation and diarrhoea prevalence was observed, the sustainability of the approach was, upon evaluation, questionable.

Many PLWs in the intervention community expressed that, although they wanted to implement their learnings from WASH training sessions, they often lacked the resources to do so fully and effectively. Only 46% of households in the survey area had access to a safe water source such as a borehole or protected well, and those who fell outside of this percentage felt that, on a practical, day-to-day level, using sterilised, boiled water at all times during baby care was not easily achievable.

In KIIs, community stakeholders also expressed concerns over the sustainability of the Baby WASH package in Nangere LGA, emphasising that, in exclusively targeting PLWs, interventions were unlikely to promote community uptake of safe WASH practices, and, in turn, the development of safe WASH environments for children who had reached roaming age. They also emphasised that, because the Baby WASH package was primarily implemented by Action Against Hunger staff, interventions replicated those rolled out in emergency response contexts, rather than those that would facilitate sustainable development.

The issues outlined above emphasise that, if the Baby WASH approach is to facilitate community resilience and long term uptake of safe WASH practices in protracted displacement contexts, household level interventions need to be integrated with those that improve WASH at the community level. Findings from the HSs, FGDs and KIIs suggest that more direct stakeholder engagement in interventions, coupled with a greater focus on capacity building initiatives that allow community workers to take ownership of WASH and nutrition training sessions, would greatly enhance the Baby WASH approach’s sustainability and long term effectiveness. It is also evident from KIIs that interventions need to target all caregivers (including fathers and the elderly) to ensure that the full impact of Baby WASH training is realised.

Such changes could be reinforced by (a) engaging local institutions (such as mosques, schools and community groups) to disseminate and reiterate child WASH and nutrition messages; (b) mobilising volunteer hygiene promoters (VHPs) to monitor household WASH practices; and (c) grouping PLWs according to the age of their children. 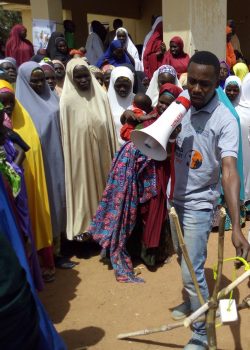