The proliferation of anti-terrorism legislation has dramatically risen since 9/11, producing multi-layered, overlapping and sometimes conflictual legal frameworks at the international, regional and national levels. Counterterrorism laws are putting strains on humanitarian NGOs, making operations more complicated and expensive, while adding additional pressures for both management and the beneficiaries of humanitarian aid. Indeed, the impetus for this report is due to an increasing concern by humanitarian organizations of the adverse effects of counter terrorism legislation and clauses on their operations.

Indeed, it would seem incumbent on each organization to educate itself on what national legislation, as well as international law, has to say about supporting terrorism. Not only do humanitarian organizations have to abide by the laws and rules of the country in which their resources are deployed but they have to be aware of national criminal codes. Organizations headquartered (or with a presence in a given country) will be held accountable to the laws of that land. In addition, employees who are citizens of that country can also be charged in extraterritorial fashion if found in contravention of counter terrorism laws put forth by donor countries.

Ironically, these developments are taking place in parallel with the “Grand Bargain”, an international agreement which seeks to facilitate humanitarian funding. Initially proposed by the UN High-Level Panel on Humanitarian Financing, more than 20 of the largest governmental donors and over 30 humanitarian organizations, including UN agencies and NGOs, agreed to a series of changes in the working practices between them, including increasing cash programming, funding and cutting bureaucracy.

The aim of this report is to look at the embedded web of counterterrorism legislation, sanction regimes and donors agreements, and to examine their impact on humanitarian NGOs. This report focuses on seven important donor countries, as well as the UN and the European Union. While similar research has already been conducted by organizations such as the Norwegian Refugee Council (NRC), the UN Office for the Coordination of Humanitarian Assistance (OCHA) and Chatham House, the rapidity at which new count-terrorism regulations is introduced requires NGOs to be constantly aware of the changes. Furthermore, the overall objective of this report is to consolidate the counterterrorism policy and advocacy work that has been done by Action Against Hunger over the past years and to develop operational and advocacy guidance based on the current counter terrorism legislation of its core institutional donors. The aim is not to provide legal advice but to identify current trends and to provide recommendations to reflect on and adopt new policies and measures to continue to uphold the humanitarian principles in the years ahead.

This report identifies common principles, operational implications, red lines and considerations that humanitarian organizations must take into account with respect to counterterrorism legislation impacting its programming worldwide, in particular in fragile states where designated terrorist groups operate and, in some cases, control territory. Indeed, many civilians who are suffering from malnutrition, food insecurity or famine do live under the control of designated terrorist organizations such as Hamas in the Gaza Strip, Al-Qaeda in the Arabian Peninsula in Yemen, and Boko Haram in Nigeria.

The report identifies general current trends and challenges to humanitarianism in the age of counterterrorism, violent non-state actors and global conflicts, including the criminalization of aid. The report examines the national legislation, sanction regimes and donor agreements of some of Action Against Hunger’s biggest donors as well as several other multilateral entities. These include the United States, Canada, France, Germany, Sweden, the United Kingdom, the EU, the United Nations, and the Financial Action Task Force. In addition, the report maps out officially designated terrorist groups, as listed by
donor governments, to help humanitarian organizations to understand the environment in which they operate and in which geographic areas non-state armed groups are present. The report sections explore the operational challenges of counterterrorism regulations and the reaction of humanitarian actors to donor legislation, and how counterterrorism conflicts with humanitarian international law and humanitarian principles. Lastly, the report outlines redlines and advocacy positions that organizations could consider in the future as counter-terrorism measures continue to expand. The recommendations and strategic advice questions raised in this report are meant first and foremost for Action Against Hunger, but could equally be applied to other NGOs that work at the frontlines of complex emergencies. 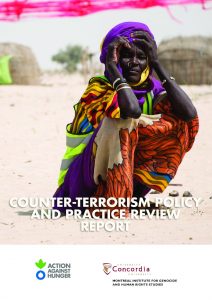