On Day 3 of the International Health and Nutrition Workshop we’re zooming in on adolescent health as part of the Continuum of Care.

In the last blogpost we introduced the Continuum of Care, which is this year’s central theme of the International Health and Nutrition Workshop. The CoC links caregiving in different times of people’s lives, because good health practices during childbirth depend on the quality of care during pregnancy for example, and health during childhood depends on caregiving and health conditions during the neonatal and postnatal periods.

In light of the CoC, adolescence is a critical time with regards to health and nutrition needs and opportunities. In the region that the CoC mainly addresses, adolescents likewise represent a significant group: 89% of adolescents live in low and middle-income countries. Adolescents make up one third of the population in these countries. Of all adolescents worldwide, 19% live in Africa and 30% live in Southeast Asia.

Adolescence is defined either as the period between the age of 10 and 19 (WHO), or between 10 and 24 (Lancet Commission). As the bridge between childhood and adulthood it is a critical period in the development of every person, for broadly three reasons: 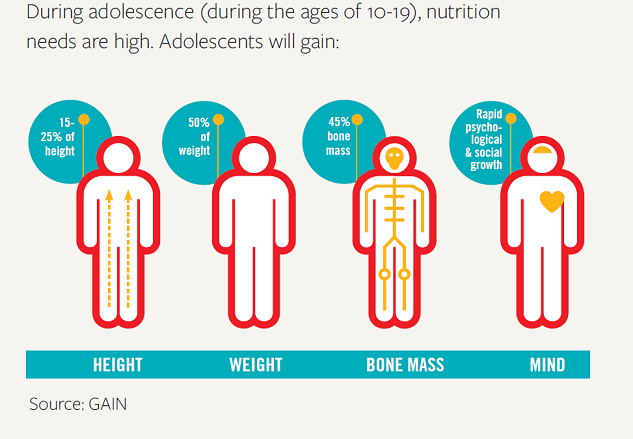 Adolescence represents a ‘window of opportunity’ to address nutritional problems and establish or modify critical lifestyle habits. It is the period when identities, values, perceptions and attitudes are formed, which can shape people’s lifelong health, diet and eating practices. This can include habits such as:

However, adolescence also represents a vulnerable time, with threats to good health and nutrition. The surge in brain development can result in impulsive and risky behaviours that may undermine one’s health.

For young girls, pregnancy can also pose a serious health risk. Complications in pregnancy and labour is the number one cause of death for girls aged 15 to 19 worldwide. In low and middle-income countries, one in five girls are pregnant before they turn 18. These countries account for 99% of maternal deaths of women aged 15 to 49 in the world. Around the world, adolescent pregnancies are more likely to occur in marginalised communities, often caused by poverty and lack of education and employment opportunities. In developing countries there is an unmet need for contraception among 23 million girls aged 15 to 19 years. As a result, it is estimated that half of pregnancies in this age group are unintended.

We are convinced that educated, healthy and skilled adolescent girls will help build a better future, advance social justice, support economic development, and combat poverty. They will stay in school, marry later, delay childbearing, have healthier children, and earn better incomes that will benefit themselves, their families, communities and nations. Investing in their rights and empowerment will help accelerate the achievement of internationally-agreed development goals, including the Millennium Development Goals (MDGs).

Activities to address these issues should be implemented at different levels: the individual level, community level and public policy level. For adolescents to enjoy health and well-being and improved nutrition, they should have the following minimum capacity or agency: 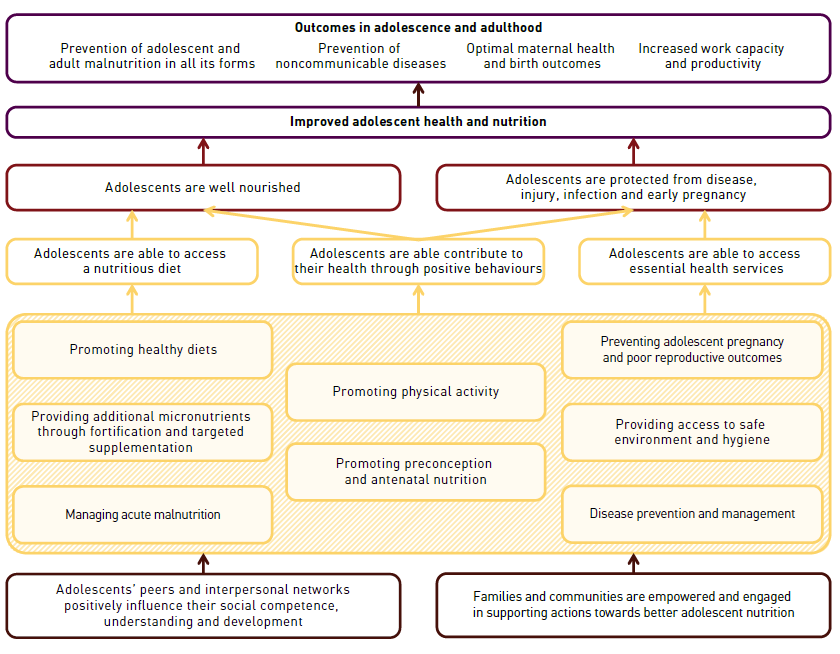