Here we’ll look at what you, the Action Against Hunger staff, identified as the key trends likely to affect our sector and our organisation specifically, and where those differed in different parts of the world. 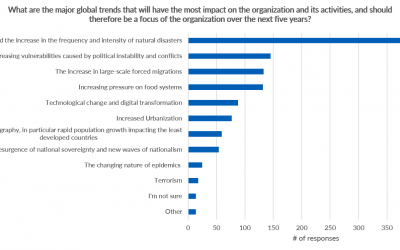 The conference in Valencia is now well underway. We’ve heard what’s come out of the staff and stakeholder consultations for the development of the ISP3, which we’ll be sharing with you shortly. And we’ve even heard what our International Executive Committee thinks about it (more on that tomorrow!). Here, we’re going to focus on one particular aspect of that consultation: the key trends. We’ll look at what you, the Action Against Hunger staff, identified as the key trends likely to affect our sector and our organisation specifically, and where those differed in different parts of the world. 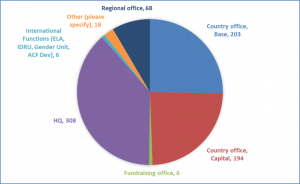 Over 800 of you replied to the survey – thank you! It’s great to have such a good portion (10%) of the network participating in this conversation, which is forming the basis of discussions and decisions taking place here in the network. Half of those respondents were from country offices, which is also encouraging to see.

We also spoke to internal stakeholders directly, as well as external stakeholders. These conversations, too, have laid the foundation for the exploration of our key trends, value proposition and strategic priorities that we are carrying out today and tomorrow morning.

Climate change and the increase in the frequency and intensity of natural disasters emerged as by far the most significant global trend in the minds of staff. Behind this, increasing pressure on food systems, the increase in large-scale forced migrations and increasing vulnerabilities caused by political instability and conflicts were cited to a similar extent.

Climate change remained the predominant concern across all regions but, as might be expected, there was some variation across regions regarding the other key trends:

By comparison, there is a much broader spread of opinion with respect to the significance of global sector changes. The most significant changes are anticipated with respect to the changing humanitarian funding landscape. Somewhat similar concern is expressed regarding the increasing role of private actors, the growing consolidation of actors, increased demands placed on NGOs and the shift to the Global South.

As it came out so strongly, and is such a huge topic, we’ll be sharing a post focusing in on climate change and on some of the things the participants at the conference had to say about it.

In the meantime, if you’re interested in learning more about the most significant influencing factors on our sector and our organisation over the next ten years, check out the IARAN’s Future of Aid report and accompanying infographics.

Or go back to the ISP3 Portal to read more about our next ISP and what’s happening in Valencia.