The project began with a synthesis of relevant documents, in particular, a thorough analysis of the program proposal to highlight key lines of enquiry for the baseline and generate eight questions for analysis to address. Eight tools for data collection were developed by the team – three of which were designed in KoBo for mobile data collection. The client and other consortium partners, both remotely and in-country, inputted on these and some changes were made to be sure the questions were relevant and suitable to the primary education system, culture, and political situation in Somalia. Two people travelled to Somalia to oversee data collection: Robina visited Puntland and Somaliland while Deepak covered South Central (Mogadishu).

Data was submitted by enumerators daily as various tools were completed and this was computed into a master database. In total, data was collected for 84 schools (out of the 121 schools targeted by the programme) in 14 regions in Somalia. Analysis was split into eight sections according to the baseline questions proposed in the inception report.  Analysis used a triangulation approach to draw on findings from different respondent groups to conclude key findings for each section. Nvivo was used to store and analyse qualitative data from the FGDs and KIIs, while the quantitative data was analysed in excel.

Our in-house team then proceeded with designing the report, including an infographic summary of selected key findings.

The primary output was the baseline report itself. This report addressed eight programme related questions and provided a list of key findings and recommendations. The secondary output was a database containing data on all 84 schools included in the study including data on enrolment, retention and respondent characteristics across the relevant tools. The completed data collection instruments are also available for each school. 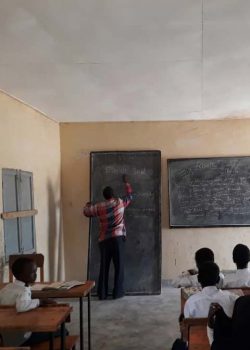 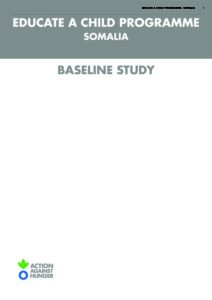