There are at least four strong connections between ACF’s mandate, its technical policy and mental health and child care practices:

➡ Action Against Hunger intervenes above all in emergency situations during which human lives and social and family ties are affected and individuals are vulnerable. These situations lead to changes in both child care practices and the environment’s capacity to provide them;
– After a natural disaster, the percentage of people suffering from moderate to severe mental problems increases from 12% to 23-24%; and 30-50% of the population suffers from psychological distress, which can also lead to decompensation.
– Over the past 20 years, a number of studies have demonstrated clear interactions between poverty-related factors and poor psychosocial health. Evidence indicates a cyclical relationship between the two.

➡ Child care practices and mental problems as causes of malnutrition;
– Several studies (for the most part conducted in developing countries in Asia and in non-emergency situations) have demonstrated that children with depressed mothers face a greater risk of malnutrition and delayed growth; the risk of infant mortality also increases.
Approximately 30% of women in developing countries suffer from depression during pregnancy or following childbirth; these rates increase in emergency situations.

➡ Hunger leads to psychological changes and behaviours that handicap individuals (adults and children) in their ability to adapt in their day-to-day life, and which have a negative impact on social relationships;

➡ Malnutrition has medium- and long-term consequences on child development (delayed development, impacts on cognitive, intellectual, emotional and social functions, etc.) that can be lessened. 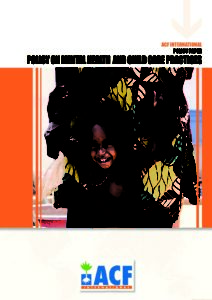