A summary of findings from an integrated SMART nutrition baseline survey conducted in Dhaka, Bangladesh in 2022
Published: 2022

In Bangladesh, the urban context has unique characteristics and complexities. There is a lack of nutritional data for children under five and PLW living in the urban slums in Dhaka. Previous national level surveys focused on other rural and urban areas. In May-June 2022, the Action Against Hunger Bangladesh Nutrition Surveillance Team conducted an integrated SMART nutrition baseline survey in the Dhaka North City Corporation (DNCC) and Dhaka South City Corporation (DSCC) urban slums. This executive summary presents the key findings from this survey which set out to determine nutrition status (e.g. wasting/acute malnutrition, stunting and underweight) of children under 5 years of age and of pregnant and lactating women (PLWs) along with the possible causal factors of the malnutrition situation in the slums. 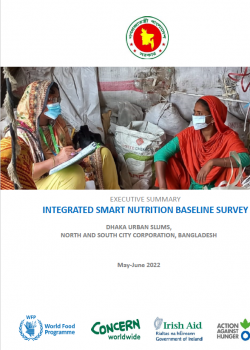 A summary of findings from an integrated SMART nutrition baseline survey conducted in Dhaka, Bangladesh in 2022
Year Published: 2022