The main objectives of this document are to ensure a balanced representation of women and men of all ages, ensure communications avoid stereotypes and promote multi-dimensional representation and portrayal, and facilitate an accurate and holistic understanding of gender-based violence.
Published: 2017

OBJECTIVE: The main objective of this document is to (1) ensure a balanced representation of women and men of all ages, reflecting the composition of society, and human experiences, actions, views and concerns, a (2) ensure communications avoid stereotypes and promote multi-dimensional representation and portrayal of women and men of all ages, and (3) facilitate an accurate and holistic understanding of gender-based violence in all its forms as an internationally recognized violation of human rights in all Action Against Hunger communications.

CONSIDERATIONS TO BE MADE FOR VIDEOS AND IMAGES:

1) Gender Stereotypes do not appear (Stereotype: depiction of traditional “feminine”/“masculine” characteristics and male/female roles, thereby making them appear normal and inevitable while excluding other possible traits and functions for men and women in society.
Special attention should be given to ensuring there is a gender balance in the following ways:
• Proportion of women and men of different ages
• Women and men directly interviewed/quoted in news & current affairs content as sources of information and/or opinion.
• Women and men appearing as 1) spokespersons; 2) experts; and 3) “ordinary” citizens in news & current affairs content is balanced.
• Women’s and men’s voice in voiceover in video and/or trainings.
• Representation of women and men in active/passive roles

2) The term ‘survivor’ should be used rather than ‘victim’ unless the individual affected by the violence uses the later term or has not survived.

3) When possible, include multi-dimensional representation and portrayal of men and women. This shows creative efforts to challenge/counter gender-based stereotypes and other forms of sexist representation.

4) Use non-judgmental language, distinguishing between consensual sexual activity and criminal acts, and not blaming the victim or survivor for the crime.

5) Use background information and statistics to present gender-based violence as a societal problem rather than as an individual or personal tragedy. 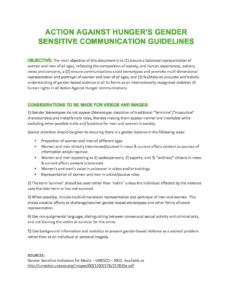