There is a general consensus regarding the fact that hunger and conflicts reinforce each other. The alarming global resurgence of hunger, and especially the risk of famine, unfortunately aligns with the rise of conflicts. Action Against Hunger recognizes that it is impossible to have an effective fight against hunger without tackling the key elements of the hunger and conflict cycle.

In this context, the 2417th Security Council Resolution of May 2018, which recognized food insecurity linked to conflicts as a matter of peace and security, Action Against Hunger developed a case study in order to illustrate the cycle and to propose concrete and contextualized solutions.

The Central African Republic presents key elements of the hunger and conflict cycle, and this study of the Central African Republic allows the identification of elements that need to be treated with the highest priority to break that cycle: the context of chronic violence that weakens the State and the populations; the abandonment of the agro-pastoral sector, which has led to an augmentation of the food and security crisis; and the restriction of the humanitarian space, which reduces access to the basic services by the populations. 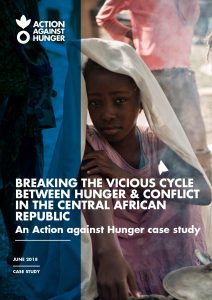