How the UN and Member States Can Help to Break the Cycle. A briefing for members of the UN Security Council to promote adoption of Resolution 2417 on conflict and hunger.
Published: 2018

Globally, hunger and malnutrition are on the rise. The UN has recently estimated that the number of undernourished women, men and children in the world reached an estimated 821 million in 2017.  Conflict and insecurity, alongside climate change, have been identified by the UN as leading reasons for the recent reversal in a long-term declining trend in world hunger.

In 2017, conflict and security were the primary driver of food insecurity in 18 countries. In that year, twenty million people across four countries – South Sudan, Somalia, Yemen and North-East Nigeria – faced famine, largely driven by conflict. This was a crisis at a scale not seen in recent memory. While the severity of famine risk has abated somewhat, the prevelance of undernourishment around the world has risen.

The number of children under the age of five in conflict affected countries who are now estimated to need treatment for life-threatening malnutrition has increased by nearly 20% since 2016 to 4,500,000. More than half a million children in conflict zones could die from extreme hunger before the end of the year. Malnutrition is not only a direct threat to life, it also weakens children’s immune systems and leaves them vulnerable to killer diseases – including cholera and pneumonia. Where children survive, the effects of malnutrition can be life-long and affect physical and cognitive development. Malnutrition has also been shown to limit economic activity and social mobility, compounding a pattern of poverty.

In May 2018, the UN Security Council passed Resolution 2417. It condemns the starving of civilians as a method of warfare and the unlawful denial of humanitarian access to civilian populations, which deprives people of essential means of survival. The resolution also recognises that people can be forcibly displaced by food insecurity driven by armed conflict and violations of international law. The consensus in support of Resolution 2417 is an important acknowledgement by governments and the UN that action is needed.

To break the cycle, hunger must become a red line for the international community in the conduct of hostilities. We must improve early warning and response to the use of starvation as a weapon of war; prioritise food security and livelihoods; and minimise the impact of security responses to conflict on livelihoods and access to food. We must also effectively and consistently contribute to halting conflict-related hunger and malnutrition. This briefing sets out three proposals for how the UN Security Council and UN Member States can implement Resolution 2417 and can also go further still to help reverse the growth in conflict related hunger and malnutrition. 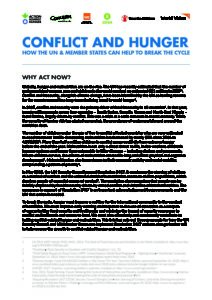