Seeking to develop and test new MUAC bracelets to increase the sensitivity and specificity of mother and caregiver measurements.
Year Started: 2015 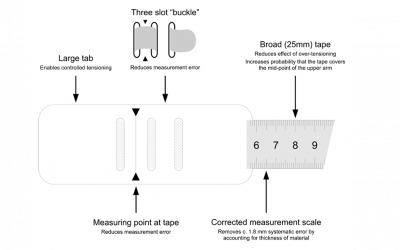 According to Joint Child Malnutrition Estimates, nearly  17 million children under five suffer from severe acute malnutrition (SAM) worldwide. Regularly screening children for acute malnutrition at the community level is critical to increasing detection and referral to treatment services; commonly performed by community health workers (CHWs) using mid-upper arm circumference (MUAC) measurements. However, CHWs manage several health activities which often prevent them from measuring MUAC on a regular basis. As a result, increasing attention is being paid to the potential role that mothers and families themselves can play in the screening of children for acute malnutrition at the community level.

Based on this evidence, a team of nutrition and operational experts came together to launch the “Click-MUAC” project, seeking to develop and test new MUAC bracelets to increase the sensitivity (ability to detect SAM/moderate acute malnutrition (MAM) and specificity (ability to rule out SAM/MAM) of mother and caregiver measurements. By improving the accuracy of measurements, the project sought to improve the effectiveness of mother/caretaker detection of acute malnutrition at the community level.

In results published in Archives of Public Health (2018), mothers demonstrated good sensitivity and excellent specificity in the classification of SAM with all four devices, and as well as in the classification of global acute malnutrition (comprising both SAM and MAM) with devices 3 and 4. These results indicate that mothers and/or caregivers can conduct sensitive and specific classifications of their child’s nutritional status with better results than reported in previous studies. However, while the Click-MUAC prototypes performed well, the uniMUAC insertion tape performed comparatively for both mother-led and health clinic staff-led classifications of acute malnutrition.

Based on this evidence, Action Against Hunger also conducted an operational pilot (May – August 2017) in Isiolo County, Kenya, to test an even more simplified version of the uniMUAC tape: the centimeter scale was removed, and the tape was shortened. Results from this pilot confirm that the simplified tape can be used by mothers/caregivers to measure children’s MUAC with minimal training and demonstration. Furthermore, results indicate that the use of the simplified tape may have also led to earlier detection of MAM, as the average MUAC on admission to MAM treatment was increased at the end of data collection, as compared to the start of data collection.

Given the evidence generated by the trial and operational pilot, Action Against Hunger has begun advocating for the adoption of the mother/family MUAC approach globally and is working to integrate the use of the simplified uniMUAC tape within our programs. The project also provided strong evidence for using the uniMUAC tape to scale up the mother/family MUAC approach at community-level. We aim to train mothers on acute malnutrition detection in Kenya, and other countries, and will document the effect of giving mothers this knowledge and tool in terms of admissions and coverage.