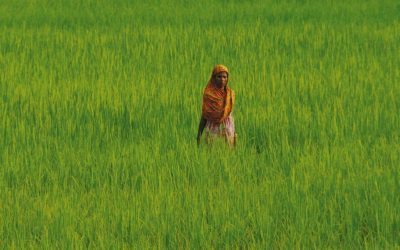 In Zimbabwe, recent testing of harvested maize, the main stable food in the country, has revealed significant levels of grain contamination by aflatoxin, which is fungal toxin with many health implications. – . Consumption of contaminated grains can affect human health; babies are also at risk through their mother’s breast milk. In young children, aflatoxins can cause stunting, poor cognitive development, and greater susceptibility to infectious diseases. While various technologies have been developed to reduce post-harvest losses, their effectiveness in reducing aflatoxin contamination in grain and exposure in humans is poorly understood.

The research project “Reducing maize-based aflatoxin contamination and exposure in Zimbabwe” investigated the efficacy of airtight, storage technology to reduce fungal growth, and therefore contamination in grain, and exposure to humans. The study was carried out in Makoni and Shamva districts in Zimbabwe by the University of Zimbabwe and Action Against Hunger. It is part of Cultivate Africa’s Future (CultiAF), a four-year, CA$15 million research partnership designed to support applied research to combat hunger in sub-Saharan Africa.

The project used a randomized control trial to test the efficacy of two technologies – metal silos and thick plastic ‘super bags’ – against the use of traditional methods of storage. Researchers assessed the extent of aflatoxin contamination in grain stored in the airtight technologies against traditional methods on a quarterly basis for two seasons. They also tested aflatoxin exposure in mothers and children, using aflatoxin M1 as a biomarker in urine samples and breast milk.

Results showed that the use of airtight technologies reduced aflatoxin contamination during storage. The occurrence and levels of aflatoxin B1 (AFB1) in maize grain stored in hermetic metal silos and hermetic super bags, was less than in conventional storage facilities, indicating that both technologies were superior to the conventional methods. Results also indicated that use of hermetic technology for storing maize grain reduced exposure of women and children to aflatoxins.

Farmers’ knowledge and attitudes towards pre- and post-harvest management practices for reducing aflatoxins also changed. There was increased awareness of aflatoxins and the health risks associated with consumption of contaminated food, though women were more knowledgeable than men. Farmers adopted various good pre- and post-harvest practices to minimize aflatoxin contamination of grain.

Grain storage using hermetic technology has the potential to reduce human exposure to aflatoxins. Whilst the key requirement of hermetic technology is to reduce the exposure of maize grain to aflatoxin, farmers should be encouraged to use the technologies for other foods at risk from aflatoxin contamination. Twelve artisans have been trained in conjunction with the Department of Mechanization, to fabricate the metal silos and sell to farmers participating as well as those not participating in the project.

Utilization of government structures facilitated implementation of the project, ensuring success, effectiveness and sustainability of the project outputs. The project provided critical evidence on the efficacy of hermetic technology in reducing aflatoxin exposure in maize and humans and project results could form the basis for enhancing food safety and post-harvest storage policy reforms in Zimbabwe.