Over the past 10 years, Action Against Hunger has been working to facilitate access to safe drinking water in vulnerable communities in Haiti, particularly in cholera-prone areas. Our work includes water point construction, water point rehabilitation, supply of drinking water and promotion of home water treatment. These initiatives stem from the fact that the country’s poor access to drinking water is conducive to water-borne diseases and thus increases the risk of malnutrition. According to the results of the Mortality, Morbidity and Service Use Survey (EMMUS VI, 2016-2017), only 60% of the Haitian rural population has access to improved water sources and the prevalence of diarrhea is 20.6% for girls and 21.8% for boys under the age of five. Due to the impossibility of supplying all areas with hydraulic infrastructures quickly, Action Against Hunger is relying on home water treatment to improve the situation of vulnerable Haitians in the short and medium term.

From June 2018 to February 2019, Action Against Hunger implemented a project funded by UNICEF to promote home water treatment. The strategy revolves around two main axes: distributing fully subsidised coupons to users of unsafe water points for the acquisition of a home water treatment solution/Aquajif, and supporting the vendors of water treatment products. The intervention reached 8,048 beneficiaries with the involvement of 10 vendors.

As a first step, Action Against Hunger gave a bottle of Aquajif to households in order to familiarise them with this product and its use. Then, each beneficiary received two coupons covering the entire price of a bottle of Aquajif in order to connect households to their nearby retailers put together users and retailers available nearby. The coupon distributions were coupled with awareness sessions to encourage purchase and use of Aquajif after the intervention. The results of the final survey showed that the majority of the targeted population had adopted the use the water treatment product. During this survey, 77% of the households visited underwent a test for residual chlorine in drinking water (a sign that the water has been treated). Results show that the beneficiaries didn’t use the correct dose of the product. Only 45% of the tests showed an appropriate residual chlorine level between 0.5-1g/L. However, traces of chlorine in drinking water were found in approximately 70% of beneficiary households, up from 43% of households at the baseline. The vast majority of households report treating 2 to 3 buckets of 25 liters of water per day. 32% of beneficiaries said they wanted to integrate this product into their household’s current expenses and are prepared to spend 57 gourdes on average to get a bottle (the price is 50 gourdes).

However, a study conducted in February 2019 showed that availability and access are the main factors in the use of these products and that the willingness to pay for a bottle of Aquajif is actually less than 57 gourdes. This study used the Becker-DeGroot-Marschak (BDM) lottery, an experimental method, to avoid reporting bias. BDM’s exercise consists of a free lottery game, in which respondents have the opportunity to buy the product at the maximum price they wish to pay for it. This method puts the consumer in a real situation of purchase. The results suggest that users are willing to pay between 32 and 35 gourdes for the bottle (its selling price is 50 gourdes).

These key lessons prompted us to conduct a post-intervention follow-up survey three months after the project. From March 2019 to May 2019, Aquajif vendors sold a total of 45 bottles combined. The people who frequent the outlets are mostly former beneficiaries. Assuming that each of these 45 bottles was bought by a different beneficiary, only 0.56% of the beneficiaries continued to buy the product. They understand the health benefits of treated water and they use domestic water treatment products when they are given free of charge. However, they do not buy them, even when they are available nearby.

HOW TO ACHIEVE BETTER RESULTS?

UNICEF, the project’s donor, organised a lessons learned workshop with different partners they are funding in the WASH sector. This study has showed that in any intervention aiming to increase the use of home-water treatment products, special attention should be given to the restocking of the points of sale and the retention of users. These learning exercises fuelled the design of a new project. Building on lessons learned, the new project will feature: 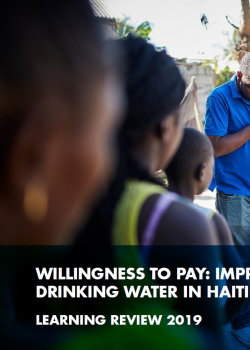