Listen to a 5-minute podcast summarising this article here:

Maternal and child malnutrition continues to be one of the leading causes of mortality and morbidity in low and middle-income countries. Despite gains globally, undernourishment remains high in India, with over 34 per cent of the population affected. Currently, the country is ranked 103 out of the 119 nations in the 2018 Global Hunger Index. Of children aged under five, 44 per cent are underweight while 72 per cent of infants have anaemia.

Hunger, malnutrition, and poverty result from and reinforce injustice and inequality. These injustices take place at every level, from the household to the global level, and are rooted in established power imbalances. Perhaps the most pervasive and universal imbalance is based on sex and gender, and in India gender inequality is deeply entrenched particularly in certain regions of the country. Gender inequality plays an important role in everything from who has access to food to who has the resources to grow and buy it, who eats first and who eats last. Acknowledging the influence of gender is at the core of our strategy to fight against malnutrition.

ENGAGING MEN IN THE FIGHT AGAINST MALNUTRITION

As part of the development of our implementation strategy in Rajasthan, Action Against Hunger undertook a survey in 2015 to assess the impact of our interventions in the Baran district, with the objective to uncover practical recommendations for better tailoring future interventions. The study found that excluding men in project delivery could act as a bottleneck in preventing malnutrition. These findings highlighted the need to involve more men in programming and improve the implementation of counselling and behavioural activities with male participants. One of the men from a community where we implement had the following to say:  “My impression is that your programme involves men very little. Because men are family decision-makers, they should also be made aware appropriately so that they can take the correct decision at the correct time.” It was consequently decided that engaging men was a priority need in order to recognise their role within the household as decision-makers and caregivers.

To address this need, Action Against Hunger piloted a project in Rajasthan aiming to engage more men in the fight against malnutrition. This project involved several stages of activities. First, the team held discussions with men to assess their willingness to sit and discuss malnutrition problems together. Following those discussions, men in households with expectant mothers or children suffering from malnutrition were asked to attend a series of educational sessions and focus group discussions around specific maternal and child health and nutrition themes. Topic of these sessions included:

Another activity involved the Action Against Hunger community mobilisers conducting outreach to encourage fathers (and grandfathers) to engage in childcare activities and reinforce their own roles and responsibilities when caring for their children. As a way to encourage men’s engagement, it was decided that a men’s group would be established and educated on different issues, with at least one active person from the group going on to facilitate their own sessions under the supervision of Action Against Hunger staff. The aim of establishing these men’s groups was to increase their accountability and empower them to make the best decisions for their families.

The approach described above was piloted in 2014, and led to the strong and active participation of men in the monthly men’s group discussions. This increased engagement contributed to improved nutrition outcomes in many households. Action Against Hunger India observed the following since the implementation of this project:

Therefore, the effort to engage with men has contributed to achieving several departmental objectives relating to the reduction of malnutrition in the region. The project is currently the centrepiece of an effort to scale up the men’s groups in all states and implement key prevention activities through them.

This project is delivered in rural areas where men have an overwhelming and unequal social capital. In these localities, unequal gender norms were particularly entrenched and difficult to challenge. This led to difficulty in mobilising and engaging men to organise and participate in discussion groups. Some of the strategies that Action Against Hunger used to address this challenge included:

Involving active members of the community to ensure community participation. In this way, interested individuals can act as champions to encourage others. The added value of the groups was also promoted by giving participants clear roles and objectives and encouraging mentoring and skills-sharing.

Taking a back seat in facilitating the sessions can help to engage participants, but it is also important to ensure accountability and sufficient guidance at all times. The project was more effective when focusing on incremental increases in consensus and acceptance. The participants reacted well to this approach, driven forward by their sense of owning the recreational spaces set up for them to discuss the small steps needed to improve their lives and that of their families. It is hoped that the men who learnt from the groups will take responsibility and pass the lessons on to other new fathers, thereby developing good practices as the norm in their communities.

Switching from malnutrition issues to community based and maternal and child health issues can help address the needs and issues of the group in the community. Addressing a cross-cutting range of relevant issues that affect the community can increase engagement and maintain interest.

INVOLVING MEN AS A STRATEGIC OBJECTIVE

The learning generated from this experience can be used in other thematic programming areas, particularly in other gender related areas such as gender-based violence (GBV). GBV includes early/forced marriages, physical as well as psychological violence and denial of resources, opportunities and services. We hope that engaging men in these issues, similar to how we have engaged the male community over maternal and infant health and nutrition issues in India, can be a good starting point to bring about real change. In order to fully achieve Action Against Hunger’s strategic objectives, across all thematic areas, the role of men must be considered at both the strategic and programmatic planning levels. 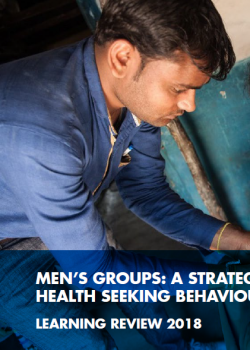