Local Advocacy in the Sahel

Action Against Hunger has been present in the sub-region (Mali, Mauritania, Niger) for fifteen years, implementing multi-sectorial projects that aim to reinforce resilience within communities for the prevention and treatment of malnutrition.

The main challenge Action Against Hunger faces in the region is that of ensuring the continued delivery of services related to food safety and nutrition. To overcome it, our efforts are twofold. First, we ensure that nutrition is systematically integrated into communal development plans and budgets, and we support the implementation of a multi-sectorial response at the decentralised level. Second, we support the formulation and implementation of multi-stakeholder dialogue at the regional level, and advocate for the inclusion of nutrition in budgets with parliamentarians.

Action Against Hunger uses a 5-step methodology to conduct an in-depth analysis of the socio-economic and health situation of local communities. Together with town councils and other partners in the area, plans, policies and budgets are analysed in order to identify underlying deficits, as well as opportunities for sustainable investment in the delivery of services related to food safety and nutrition. This approach often involves strengthening the technical, managerial and financial capacities of key decision-makers at the local level during workshops held in Mali, Mauritania and Niger.
In Mali

Since 2017, Action Against Hunger has undertaken advocacy actions in partnership with the National Federation of Community Health Associations at the national and local level in order to advocate in favour of sustainable investment towards the continued delivery of services related to food safety and nutrition by local authorities. In 2019, thanks to our advocacy work, 53 communes in the Kayes region integrated nutritional security into their social, economic and cultural development programmes (PDSEC). For example, the commune of Gadougou built two maternity wards, and recruited two obstetric nurses, while the commune of Sefeto-Nord built a structure for the care of children admitted to the Unit of Recovery and Severe Ambulatory Nutritional Education (URENI) within the community health centre.

This unprecedented success was made possible thanks to the strong mobilisation of all stakeholders in the process, such as municipalities, local media, community and district health centres, and administrative and technical authorities, including mayors.

In Niger, at the national level, Action Against Hunger worked with the Ministry of Public Health to elaborate a roadmap for the resumption of National Protocol for Integrated Management of Malnutrition (PCIMA) activities by the state. This document provides for the implementation of coordinated recovery plans between the authorities and humanitarian actors. Within this context, advocacy actions carried out at the communal level led to, an increase in the number of activities related to nutrition and health included in the Annual Investment Plans (PIA). Advocacy actions also led to an increase in the share of domestic financing dedicated to these activities.

For example, the municipality of Mayahi contributed to connecting its Integrated Health Centre (IHC) to the water reservoir, while the municipality of Tchaké covered the costs of water supply for its IHC. The health evacuation system particularly benefited from this increase in financing, reaching up to CFA 1,900,000 per municipality (€2,900).

The main challenge was that the majority of local elected officials did not master the methodology for developing and reviewing PIAs. Action Against Hunger therefore organised trainings in planning and budgeting that were provided by the decentralised directorates of the Ministry of Planning. This peer-to-peer capacity building has proven to be sustainable as local actors who have concrete experience of cooperation between different levels of governance will then replicate it on other occasions.

To compensate for the limited resources of communes in Niger, a campaign of mobilisation of good will was launched with town councils. Representatives of diasporas, the private sector, as well as influential personalities were identified to participate in mobilisation workshops. During these workshops, the mayors presented the health situation in their respective communes, as well as current nutrition and health activities in need of funding. The various representatives made commitments to help and collection committees were set up. Since then, several infrastructure works have been carried out, including the renovation of the IHC in the commune of Tabotaki and the construction of treatment rooms in the commune of Tamaské.

Faced with the reluctance of some local elected officials to seek alternative sources of funding, an inter-municipal meeting was organised, during which the communes presented the challenges they faced in terms of recovering funds, monitoring, and carrying out activities, as well as the solutions they had put in place to remedy them. Some communes were thus able to serve as models to others.

THE DIFFICULTIES OF DECENTRALISATION AND THE CHANGING POLITICAL LANDSCAPE

Decentralisation in Mauritania was instituted in 1986 through the creation of municipalities that were given certain competences, which had been the abilities of the state until then. However, the impact of these reforms on communal structures is still limited. Indeed, the municipalities have not made any progress in terms of recovering revenue and mobilising external funding. Very few municipalities submit requests for funding, rather, it is the partner that takes the place of the municipality and offers funding. The plans for communal development have often been allowed to relapse, partly because of difficulties being able to edit and revise the plan, with the exception of those that have benefited from the support of a partner.

In addition to financial constraints, several municipalities changed mayors during the last elections in 2018. Indeed, out of 18 communes where Action Against Hunger intervenes, 12 new mayors were elected. With each new elected official, we have been forced to restart the five step cycle and organise new trainings, thereby slowing the rate of progression in the area. 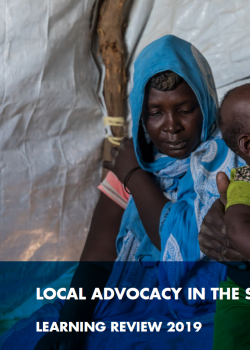