A Lancet study by Black et al. (2013) estimates that 40 to 50 million Disability Adjusted Life Years (DALYs) are lost to wasting in India; costing an economic loss of almost US$48 billion in lifetime loss of productivity. As per India’s National Family and Health Survey (NFHS 2015-16), 21% of the population were affected by wasting, 38.4% had stunted growth and 35.8% of children under the age of five were underweight.

Action Against Hunger India first began its work with rural and urban slum populations in India through Community Based Management of Acute Malnutrition (CMAM). CMAM focusses on identification, treatment and prevention of malnutrition after the age of six months. In addition to child malnutrition, 50% (NFHS 2015-16) of pregnant women suffer from maternal anaemia. This, coupled with poor nutrition, affects the foetus during pregnancy, resulting in malnutrition such as low birth weight or small for gestational age. Poor Infant and Young Child Feeding (IYCF) practices further contribute to the high levels of child wasting and stunting. To prevent malnutrition from manifesting in children from birth, it is important to begin interventions with pregnant and lactating women. Therefore, in addition to working with children from 6-59 months through CMAM, it became imperative to incorporate the first 1000 days approach to achieve sustainable impact on maternal and child health and nutrition outcomes.

In order to develop Action Against Hunger India’s first 1000 days plus CMAM intervention strategy, it was necessary to understand the factors contributing to the high prevalence of maternal and child malnutrition. A baseline survey was therefore conducted in Rajasthan, Madhya Pradesh and Maharashtra to ascertain the prevailing knowledge, attitude and practices associated with malnutrition.

The survey questions investigated demographic and socio-economic status, access to hygiene and sanitation, knowledge and practices on maternal, new-born and child nutrition and healthcare, and access to government schemes. The tool was pilot tested to ensure its relevance and validity. To ensure arising challenges are resolved in a timely and appropriate manner, communication and documentation was conducted on WhatsApp.

In all three states, despite diverse geographies, many indicators were similar. Indicators such as prevalence of institutional delivery, early registration of pregnancies at health facilities and early initiation of breastfeeding were found to be performing better than others. While Action Against Hunger India’s collaborative work with the government during the CMAM project has facilitated gradual improvements in some of these indicators, considerable work is still required to decrease malnutrition in women and children in India. The survey highlighted high levels of maternal anaemia (80% or higher), low birth weight in new-borns (40% or higher), lack of exclusive breastfeeding and low uptake of ante-natal care. Dietary diversity in women and children was reported to be almost inexistent with a prevalence in the range of 1% – 9%. Poor hygiene and sanitation behaviours were reported, with an average of 91% mothers reporting unsafe methods of stool disposal for their children, and less than half of the mothers practicing handwashing before feeding, or after cleaning their child. The wasting prevalence ranged from 10% – 40% for the three states, showing a diverse range in the magnitude of child malnutrition.

It was interesting to find that low birth weight, anaemia prevalence, uptake of ante-natal care, exclusive breastfeeding, diet diversity and WASH practices were reportedly poorer in the baseline in comparison to those projected by government health surveys.
Migration of the beneficiaries from the sampled villages posed an operational challenge. In order to account for loss of sample size due to migration, the current estimated prevalence of migration was considered as the non-respondent rate. In addition, while conducting the baselines, women were often unavailable to participate in the survey, as they would leave to work in the fields. In order to overcome this, the community mobilisers would conduct the baseline survey with the women in their farm fields.

WAY FORWARD FOR THE FIRST 1,000 DAYS PROGRAMME WITH CMAM

The findings from the baseline survey are now paving the way for Action Against Hunger India’s revised strategy for the first 1,000 days with CMAM. It has brought to light the practices to be improved for better maternal and child nutrition and health outcomes. It became clear that the programme should incorporate Kangaroo Mother Care, a WHO recommended practice which involves holding the new-born to the caregiver’s chest for a prolonged period of time. The baseline has also raised the need to find the reason behind the high anaemia rates and the low prevalence of diet diversity. An in-depth understanding on the knowledge levels and behaviour patterns surrounding diet and nutrition existing in the community is required to attain sustained impact in the long-run.

Maternal nutrition has a direct impact on the new-born and continues to influence the child’s diet and nutrition as the child grows older. Though nutrition lays the foundation for a child’s health, physical and cognitive development and in preventing malnutrition, other factors such as hygiene and sanitation also influence the child’s vulnerability to malnutrition. The baseline findings revealed that certain practices such as safe disposal of stool, use of constructed toilets (home-based or community), access to safe water, and handwashing practices during critical activities continue to be poor. Therefore, innovative strategies in the area of WASH, in collaboration with the government, will facilitate improved adoption of good hygiene and sanitation practices that can prevent the spread of infections, and assist in breaking the disease cycle of malnutrition.

Traditionally, nutrition and health programmes have women as their main target for awareness and behaviour change. However, husbands and fathers along with mothers-in-law play an important role in household level health and nutrition decision-making. Where possible, baseline interviews were also conducted with husbands or fathers. The preliminary findings from the baseline suggested that men have similar levels of awareness as women. Considering these findings, it would be important to understand the knowledge, attitude and practices of husbands and fathers in relation to health and nutrition. Simultaneously, it becomes essential to progressively include them as part of the programme implementation.

Despite the availability of government health and nutrition schemes and services, access, uptake and service delivery remains limited. Collaboration with the government at each step, at the facility and the community level, will be required to increase availability and access to health and nutrition services.
The process and findings of the baseline have raised critical lessons on programme implementation, systems that require improvement and areas of opportunity to maximise impact. 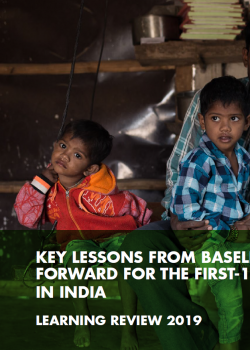