INTRODUCTION: THE DONOR LANDSCAPE IN GERMANY

Action Against Hunger Germany started its operations in Berlin at the end of 2014. Initially, the Berlin office’s focus was on fundraising from private donors. Germany is the second largest Official Development Assistance (ODA) donor globally, with over €21.8 billion donated in 2017. The high potential for institutional partnerships for the Action Against Hunger network (in terms of growth, diversification of funding and advocacy) was soon explored. Two main donors shape the German institutional donor landscape: the German Federal Foreign Office (GFFO) and the Federal Ministry for Economic Cooperation and Development (BMZ). Both the GFFO and the BMZ are centralised donors, meaning that they can only sign grant contracts with German NGOs as per legal requirements. Therefore, the majority of BMZ funds are commissioned to two state owned private entities: Deutsche Gesellschaft für Internationale Zusammenarbeit (GIZ), focused on technical cooperation, and Kreditanstalt für Wiederaufbau (KfW) focused on financial cooperation. Today, our Programme and Advocacy team in Germany serves as a knowledge hub for German donors, identifies funding opportunities and advocates for a world without hunger with the support of the international network of Action Against Hunger.

WHAT ARE THE CHALLENGES WE ARE FACING?

HOW HAVE WE ADDRESSED THESE CHALLENGES?

The support that we receive from technical and advocacy experts from the network has been key in establishing Action Against Hunger Germany as a visible and credible partner in the German aid landscape. For example, regular emails, Skype exchanges, updates on needs and emergencies have enabled us to take an active part in discussions with GFFO on the current humanitarian situation in Yemen and Syria. With the support of the network’s advocacy experts, we organised highly successful Syria and Yemen lobbies and were consequently able to increase our visibility and credibility with the GFFO and other institutional partners.

The visibility and support we get from the network’s technical and advocacy experts also helps us in the accreditation processes with the GFFO and BMZ. Both ministries expect their partners in Germany to be strong, independent organisations who are able to generate and contribute to the relevant discussions within Germany, so the voice of prominent experts is hugely beneficial. The experts from our network enable us to fill this role by sharing their experience and knowledge with us. Learning from INGO peers that have recently established offices in Germany, like the Norwegian Refugee Council (NRC) or the International Rescue Committee (IRC), shows how the accreditation processes can be facilitated. Likewise, learning from our INGO peers on relevant institutional funding and the use of advocacy to maximise our influence and reach are hugely valuable and are key to establishing a strong and long-lasting presence in Germany.

Finally, access to GIZ funding has been a huge driver of growth for us and has built our reputation with GIZ (and with its back donors BMZ and GFFO). Since the establishment of Action Against Hunger Germany in 2014, around €20 million has been secured from GIZ. Signing these contracts has allowed us to demonstrate our capacity and has contributed enormously to being as advanced in the accreditation processes as we now are.

HOW HAS ACTION AGAINST HUNGER GERMANY CONTRIBUTED TO RESOURCE MOBILISATION FOR THE NETWORK?

Even though GIZ is not a centralised donor and formal contracts can be signed by other country offices, the majority of contracts have been signed by Action Against Hunger Germany, demonstrating several advantages to this approach:

WHAT ARE THE NEXT STEPS FOR ACTION AGAINST HUNGER GERMANY IN THE COMING YEARS?

Our focus will continue to be on establishing Action Against Hunger as a reliable partner to German donors through quality programme implementation and close engagement. We will continue to provide our support to other Action Against Hunger headquarters and country offices on proposals, reports, contract negotiations, due diligence, compliance and funding opportunities.

GIZ will stay as our major focus for donor engagement, and once the accreditation process with GFFO and BMZ is finalised we will be able to grow our relationships with these donors as well. We also see a lot of potential with KfW in the future. After our success with funding for Mali, we are currently working on a second KfW contract and have invested a lot in establishing contacts at KfW headquarters level to build this relationship and identify further funding opportunities. 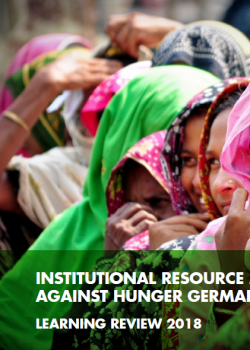