In the words of the United Nations Humanitarian Chief, “gender equality and empowerment of women and girls are at the very core of principled and effective humanitarian action.” Understanding the “specific needs, capacities and priorities of women, girls, boys and men,” and integrating “this understanding throughout the programme cycle” while facilitating “active participation and leadership of women and girls in humanitarian action and beyond; and promote transformative change for more inclusive and equitable societies” is fundamental to what we do.

This is poignantly relevant in a highly patriarchal society such as South Sudan, which is beset by conflict and recurrent nutritional crises.

Though they are often responsible for family nutrition and feeding, women overwhelmingly lack access to assets and decision-making power, and are disproportionately subject to gender-based violence (GBV). To prevent malnutrition, we must understand these gender dynamics, including the barriers women and girls face when accessing resources and services. To do this, we must conduct a gender analysis.

South Sudan is one of three countries implementing a global initiative funded by the US Bureau of Population, Refugees and Migration (piloted by Action Against Hunger Canada and in collaboration with the Global Nutrition Cluster) to increase accountability for GBV in nutrition programming. In September 2018, we conducted a comprehensive gender analysis and safety audit. The study aimed to (i) establish the basis for programme intervention design and (ii) help our programme team understand differing gender roles and responsibilities, powers, privileges and rights in relation to gender mainstreaming (then integrate the findings into current activities, coordination and advocacy).

The geographic scope of this gender analysis and safety audit included the Action Against Hunger country office in Juba, bases in Alek and Malualkon, and field sites in Aweil East and Gogrial West. The study employed a rigorous mixed-methods approach incorporating quantitative and qualitative participatory techniques, commencing with a desk review of published and grey literature to inform the conceptual approach and design of study tools.
The field study relied on household surveys, key informant interviews and sex-disaggregated focus groups. At the organisational level, a web-based survey assessed our capacity to mainstream gender and staff understanding of gender concepts.

The gender analysis and safety audit findings confirmed high levels of gender inequality in South Sudan and our areas of intervention. An overwhelming number of women are forced into early marriage, some as young as ten. Household roles and responsibilities disproportionately fall on women and girls who must meet all domestic, caregiving, food security, nutrition and water needs. Women use what remains of their time to engage in paid labour.

Decision-making control over assets and income (including that earned by women) remains male dominated.

GBV is rampant: 35 per cent of respondents said they experienced some form of GBV, with domestic violence being the most common, followed by early marriage and rape/attempted rape. Existing mechanisms for addressing GBV are largely based on local customs, and survivors are often stigmatised and ostracised; many young victims are forced to wed the perpetrator.

At organisational level, the analysis found that only 41 per cent of staff had attended any training on gender. Staff were not aware of gender-sensitive programming or indicators. Gender Focal Points in our bases reported a lack of understanding of their role and responsibilities. Staff are overwhelmingly male, with a male/female ratio of 3:1. This lack of female staff may discourage women caregivers from discussing issues with regard to their nutrition and health status, especially GBV-related issues. Nevertheless, 75 per cent of staff felt that gender issues were taken seriously by the organisation. Between organisations, coordination mechanisms for addressing GBV are poor and must be improved. In Aweil East, the study found there were no stakeholder meetings on GBV and child protection.

HOW THESE FINDINGS HAVE ENHANCED OUR PROGRAMMING

A number of the findings from the gender analysis have been used for programme enhancement. We now have significantly more information on the gender dynamics of South Sudan, which has already been incorporated into programme evaluations, proposals and reports. Our analysis of the underlying causes of malnutrition has become more meaningful when viewed through this gender lens, which in turn has enhanced programme relevance.
In addition, we found that the majority of women recognise GBV in its various forms and are committed to its mitigation and prevention. This was integrated in our programming by engaging women in awareness-raising campaigns on GBV and gender equality.

On the other hand, we found that men were largely unaware of nutrition services and kept restricting women’s movement to services. We have now introduced “male group discussions” in the community component of all nutrition programmes, to inform men on the importance of nutrition while safely challenging gender inequalities through productive dialogue.

Our results showed that our programmes can contribute to addressing GBV through a few relatively simple measures. For example, many GBV cases are referred through our nutrition sites. When our staff know about available GBV referral pathways in their area, they can serve as entry points for survivors accessing crucial protection/treatment.

Finally, as a result of this process, we successfully developed a standard safety audit tool for reviewing protection risks at site level. Using this tool, many major risks identified in the 2018 gender analysis and safety audit can now be assessed routinely and mitigation measures can be quickly evaluated.

KEY CHALLENGES AND OPPORTUNITIES FOR IMPROVEMENT

Mainstreaming gender into programmes faces a number of key challenges. Gender analyses and safety audits are in themselves difficult to conduct, particularly when field staff lack awareness of gender-related concepts and their integration into programming (even more so in a male dominated environment). In South Sudan, we have improved recruitment and retention of female staff (including establishing a breastfeeding room), but many socio-cultural barriers still prevent women from pursuing employment in health and nutrition services.

In the community, shifting the cultural mind-set remains a challenge at all levels. Men often do not understand the purpose and importance of nutrition programmes, and may prevent women from attending nutrition sites or participating in community-based activities such as mother-to-mother support groups. Male and female community leaders are often unaware of the importance of gender equality and realities of GBV, and perpetuate harmful cultural practices, such as child marriage and domestic violence.

To improve programming and its impact, one useful strategy is the inclusion of women in project management committees, which increases their decision-making power. Nevertheless, our gender analysis found that most women on these committees still lack understanding of their roles and responsibilities, and that decision-making power remains with male members. Through stronger sensitisation, women and men in these committees could have an equal voice in decisions and activities.

Gender trainings have been ongoing since the inception of our Action Against Hunger Gender Policy in 2014, but their content and strategy should be reviewed. Staff still overwhelmingly lack awareness on gender-sensitive programming, despite 41 per cent of them having attended some form of gender training. We must do more to provide staff with extensive capacity building on gender integration, including the integration of training costs in all budgets. This will lead to improvements in institutional gender mainstreaming, including recruitment of more women and implementation of gender equality activities, such as male group discussions. With staff trained in conducting safety audits that include a comprehensive analysis of protection risks, they will regularly inform service delivery. More engagement with local authorities and decision-making bodies with regards to gender analyses and safety audits will also help to integrate gender considerations into programming. 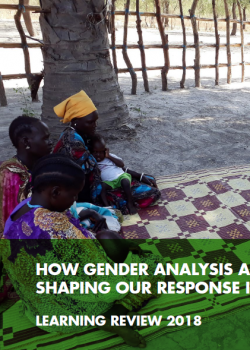