Home » Learning » Feedback and Complaints Mechanisms in Pakistan: 2014 and 2018

Feedback and Complaints Mechanisms in Pakistan: 2014 and 2018

A brief article from the 2018 Learning Review reflecting on challenges faced in two separate FCMs, and the solutions found to overcome them.
Published: 2018

Action Against Hunger promotes accountability, transparency and integrity as its core commitments, and promises the same through its core values and international charter. In line with this, we believe that affected communities have a fundamental right to share their feedback and raise concerns on the quality of humanitarian aid extended to them. Thus, Action Against Hunger strives to implement convenient and easy-to-access feedback and complaints mechanisms in its partner communities. Through these mechanisms, we aim to maximise transparency and accountability to affected populations as well as reduce the likelihood of corruption and abuse of power.

In the 2014 Learning Review, our Pakistan team outlined the importance of feedback and complaints mechanisms and highlighted practical examples of successes, including empowering community members to speak up, discovering and addressing cases of fraud, and improving the quality of programmes (see page 38 of the 2014 Learning Review). However, one challenge noted by the team at that time was that these feedback mechanisms were much less frequently used by women (only 18 per cent of feedback and complaints were made by women, compared to 82 per cent by men).

Four years later, in 2018, Action Against Hunger Pakistan concluded an ECHO-funded intervention in Peshawar, Khyber Pakhtunkhwa, Pakistan, to prevent under-nutrition among displaced communities by establishing several Outpatient-Therapeutic Programme sites. During the programme, an initial feedback and complaints system was established using complaints boxes and programme hotline numbers, available at all sites. However, this system faced similar challenges to the one established in 2014. Long waiting times at sites and the need to travel to the sites to access the phone numbers and complaints boxes resulted in a low feedback rate, particularly among women. To overcome this, the team devised a simple solution: they decided to print the hotline numbers onto beneficiaries’ treatment cards, which they could take home with them. The result was a large increase in the amount of feedback received, and at the end of the project 63 per cent of all feedback received was from women. This is a positive example of the importance of learning and adapting to challenges within a programme.

Access to feedback and complaints mechanisms (which may look different and require different channels, depending on the context) is very important in order to receive regular feedback, to improve community participation and to enhance our programming. This learning should be incorporated into all future programmes to ensure improved quality of services and enhanced accountability to the communities we work with. 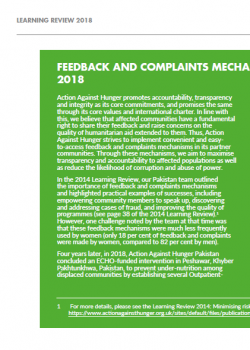