A Strategy to Establish a Field Presence in Alindao, Central African Republic

An overview of Action Against Hunger’s strategy to establish a presence in Alindao, in response to the deteriorating humanitarian situation there. An article from the 2018 Learning Review.
Published: 2018
Author: Benjamin Viénot, Former Country Director, Central African Republic

BACKGROUND: ACTION AGAINST HUNGER’S RESPONSE TO THE HUMANITARIAN SITUATION IN ALINDAO

In 2017, the South Eastern parts of Central African Republic (CAR) experienced a series of violent and sudden armed clashes between armed groups and communities. In particualr, the city of Alindao in the Basse Kotto prefecture witnessed heavy clashes between two armed groups in May 2017; which forced about 80 per cent of its population to be displaced. In the following months, almost all villages around Alindao were attacked. The total displaced population in the city reached 35,000 individuals. The very high level of tensions between communities also led to several, and largely unaccounted, killings of civilians.

As the humanitarian situation in Alindao was becoming one of the most severe across the country, Action Against Hunger decided to establish a presence there and respond to reported acute needs. However, it quickly appeared that the operational environment posed major challenges to the quick and effective deployment of humanitarian action; especially outside of Alindao city. All three humanitarian actors active in the area had been unable to deploy or sustain a presence outside Alindao city, as a result of targeted attacks against humanitarians and further threats from armed groups.

Despite these challenges, Action Against Hunger has now been successful in establishing a presence in Alindao and has positioned itself to be one of the first actors to reach out to affected populations outside of the city. Two main elements have been identified as crucial in achieving this result: following a strict strategy planning method and accepting to have a limited scope of operation.

The access strategy for Alindao was designed strictly following a five-stage methodology:

With consideration of the sensitivity of the context due attention was placed on ensuring that every step of project implementation would follow a participatory approach, in full transparency with local stakeholders. This, along with a strictly impartial selection of staff and beneficiaries, helped Action Against Hunger remain perceived as a neutral and impartial organisation, which was key for gaining acceptance. Some activities have been purposely discarded. The threat of armed groups rendered highly visible or sensitive activities inappropriate (for example, activities involving heavy cash management).

ACCEPTING TO HAVE A LIMITED SCOPE OF OPERATION

The phasing described in the passive acceptance paragraph above was recognised as fundamental for the success of this strategy. With Action Against Hunger being new to the Alindao area, initially restricting presence in remote areas enabled a sufficient amount of time for a positive reputation to develop. Action Against Hunger then benefited from the perception that it is an active organisation, one that can make a swift difference in peoples’ lives.
It was really tempting to move quickly to villages outside Alindao, but we resisted this urge. Debates were continuously ongoing amongst the team about whether we should move quicker. However, the team managed to reach a common understanding and Action Against Hunger closely followed this phasing approach, which ultimately proved successful.

The approach described in this article is not new and should not represent a major breakthrough for Action Against Hunger. Still, this strategic method could be considered as a minimum for any base planning to open in a challenging environment. It must also be noted that the strict implementation of this approach will not prevent all potential challenges. Continuous analysis of the local environment is therefore necessary, with a swift capacity to adapt accordingly. 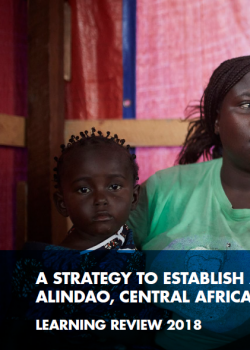