The West and Central Africa Regional Annual Report outlines Action Against Hunger’s key activities, reach and achievements in all the countries where we work in the region.
Published: 2019

At the end of 2017, UNICEF estimated that more than one million children under five would suffer from severe acute malnutrition (SAM) in 2018 in West and Central Africa. During the first quarter of 2018, trends suggested an average increase of 14 percent of the number of SAM children admitted to nutritional recovery and education centres (CREN) in Action Against Hunger’s intervention areas over the first quarter of 2018, compared to admission during the same period in 2017.

Download the report to read how we worked towards those aims in 2018, in all the countries where we work in the region. 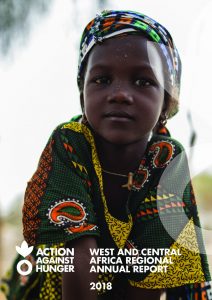