The Latin America and the Caribbean Annual Report 2020 outlines Action Against Hunger’s key activities, reach and achievements in all the countries where we work in the region.
Published: 2020

2020 has been a particularly difficult year for the countries of Latin America and the Caribbean. The fragile situation already shown by some key indicators (such as the increase in the number of hungry or poor people in 2019) and the major challenges facing the region, such as climate vulnerability and migratory movements, have been dramatically worsened by the Covid-19 pandemic, which has hit the region hard.

As Latin America is one of the most unequal regions in the world, these consequences of the crisis have been worse for the groups that suffer most from the effects of exclusion and inequality, such as informal workers in urban areas, women, young people, indigenous people, people of African descent and migrants. According to FAO, Latin America is the region of the world where food insecurity is growing the fastest: from 22.9% in 2014 to 31.7% in 2019. If this trend continues, the number of severely food insecure people will rise from 47.7 million in 2019 to 66.9 million in 2030, without considering the effects of the Covid-19 crisis.

In this complex situation, our team has mobilised to respond to the most urgent needs generated by the pandemic, the migratory movements, and the natural disasters that have hit the region in the latter part of the year.

Download the report to read more about the work we did in Latin America and the Caribbean in 2020, in all the countries where we work in the region. 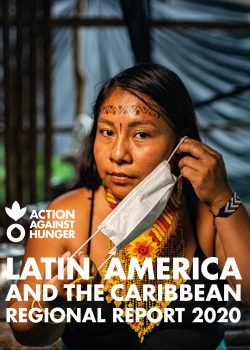