Posted: Sep 5, 2019
The Global Performance Report 2018 outlines and reflects on Action Against Hunger’s global achievements and reach in 2018.
Published: 2019

Action Against Hunger reduces child mortality. Our International Strategic Plan 2016-2020 commits us to lowering the under-five mortality rate by 20 per cent by 2020 in the ten high burden countries. As of 2018, six out of eight sampled districts have already achieved this goal. Action Against Hunger has contributed to reducing the child mortality rate by 20 per cent in Borno and Yobo in Nigeria and Bamako, Kayes, Kita, Tombouctu in Mali since 2016.

We dedicate a substantial proportion of our network’s resources to the ten high burden countries. In 2018, over two out of five individuals supported by Action Against Hunger live in either Burkina Faso, Chad, the Democratic Republic of Congo, Mali, Mauritania, Myanmar, Niger, Nigeria, Pakistan or South Sudan.

The number of people supported by Action Against Hunger nutrition projects has increased by a third between 2017 and 2018. This figure includes 718,918 admissions to Community-based Management of Acute Malnutrition (CMAM) programmes. Last year 6,147,177 individuals benefited from our nutrition work, compared to 4,505,161 in 2017. Our health programmes supported a further 2.5 million people in 2018.

Action Against Hunger is increasingly focusing on cash-based interventions rather than food distribution. In 2018, the value of cash distributed increased by 12.5 per cent, to a total of €47,720,071. The tonnage of food distributions, on the other hand, fell by 80.6 per cent to 28,776 tonnes (this was largely because of a reduction of in-kind donations to the Nigeria country office in 2018, which had previously spiked in 2017).

Meanwhile, our water, sanitation and hygiene (WASH) programmes have expanded to support 8,909,932 people, an increase of 42 per cent. Approximately one out of three individuals (33.2 per cent or 2,957,958 out of 8,909,932) who receive Action Against Hunger WASH assistance live in Syria.

Our work tackles the burden of chronic and acute malnutrition. Our International Strategic Plan 2016-2020 tasks us with reducing severe acute malnutrition (SAM) by 20 per cent in the high burden countries. In 2018, this target was achieved in six out of the 11 sampled districts. Action Against Hunger’s work has contributed towards a 20 per cent reduction in SAM in Aweil East (South Sudan), Borno (Nigeria) and Bamako, Kayes, Kita and Tombouctu (Mali).

In 2018, Action Against Hunger moved towards its goal of achieving 60 per cent coverage of SAM treatment programmes by 2020. In 2018, four out of the six surveys indicated that coverage was greater than 50 per cent. This is an improvement on reported coverage estimates in 2017, during which only two out of seven estimates exceeded 50 per cent.

Last year we responded to 37 emergencies. The Action Against Hunger Spain Emergency Pool and Action Against Hunger France Emergency Readiness and Response Unit were deployed 16 times to 11 countries: Chad, the Democratic Republic of Congo, Ethiopia, Guatemala, India, Iraq, Jordan, the Philippines, Venezuela, Yemen and Zimbabwe. Nearly 60 per cent of our emergency responses were in Africa, with the highest number in Ethiopia and the Democratic Republic of Congo. During emergencies, Action Against Hunger works in partnership with local organisations. Our partnership with Africa Ahead, for example, responded to the cholera outbreak in Zimbabwe in September 2018.

Action Against Hunger values the safety and security of our staff. There were 286 security incidents last year, amounting to a small increase on 2017 when there were 284 incidents. In January 2018, a new set of network-level safety and security principles and standards were developed through a new Security and Safety Management Policy. The total number of staff trained was 1,694 in 2018 up from 449 in 2017. In Nigeria last year, there were 362 staff trained in security (this was more than 2016’s global total).

Our International Strategic Plan 2016-2020 has the goal of generating a total annual income of €500 million by 2020. In 2018, our overall revenue was €424.5 million. This figure exceeded our income in all other years and surpassed the 2017 level by €11.7 million. The United States remained our largest bilateral donor in 2018 and became, after EU institutions, our second largest donor overall. Last year revenue provided by the United States government amounted to €79.1 million. This is a 78 per cent more than in 2017 and represents an increase of €34.5 million.

Our advocacy activities change the way hunger and malnutrition are viewed and addressed. The priorities in 2018 were focused on three areas: policies to mitigate the risk of famine in conflict affected countries; to improve the reach and efficacy of humanitarian action; and the integration and prioritisation of nutrition in national government policy and international aid policy. Our advocacy efforts contributed towards the adoption of Security Council resolution 2417, which recognises the links between conflict and hunger and condemns starvation as a weapon of war.

Action Against Hunger values working with partners; we cannot achieve a world free from hunger by ourselves. In 2018, we continued to develop partnerships to maximise the impact we make and to create a worldwide movement for change. Approximately half of all country offices (49 per cent) had a local partnerships strategy during this year, and there were 101 reported consortia memberships across the network. 40 per cent of our partnerships are with local or national governments and 35 per cent of partnerships build capacity. This report provides a case study of how Action Against Hunger has used the Network for Empowered Aid Response (NEAR) Localisation Performance Measurement Framework (LPMF).

These are just a few examples of the incredible work of our staff and partners throughout the world last year. We hope you enjoy exploring the rest of our achievements in these areas as you read this report. 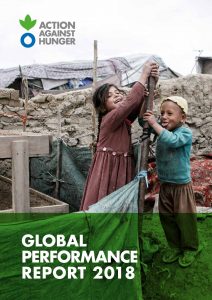